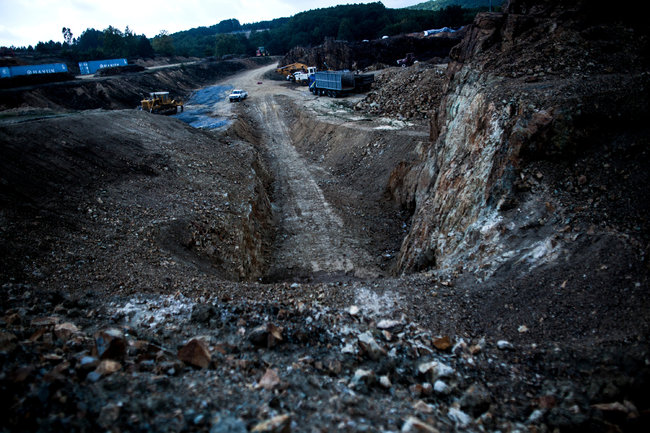 IERISSOS, Greece — In the forest near here, bulldozers have already begun flattening hundreds of acres for an open pit gold mine and a processing plant, which Canada’s Eldorado Gold Corporation hopes to open within two years. Eldorado has reopened other mining operations around here, too, digging for gold, copper, zinc and lead from nearby hills.

For some residents, all this activity, which promises perhaps 1,500 jobs by 2015, is a blessing that could pump some life into the dismal economy of the surrounding villages in this rural northeast region of Greece.

But for hundreds of others, who have mounted repeated protests, the new mining operation is nothing more than a symbol of Greece’s willingness these days to accept any development, no matter the environmental cost. Only 10 years ago, they like to point out, Greece’s highest court ruled that the amount of environmental damage that mining would do here was not worth the economic gain.

“This will be a business for 10, maybe 15 years, and then this company will just disappear, leaving all the pollution behind like all the others did,” said Christos Adamidis, a hotel owner here who fears that the new mining operations will end up destroying other local businesses, including tourism. “If the price of gold drops, it might not even last that long. And in the meantime, the dust this will create will be killing off the leaves. There will be no goats or olives or bees here.”

Tensions over new development schemes are being felt elsewhere in Greece, too, as the country stumbles into its sixth year of recession, eager to bring in moneymaking operations and forced by its creditors to streamline approval processes. Environmentalists are objecting to plans that would sell off thousands of acres for solar fields and allow oil exploration near delicate ecosystems.

“We see laws changing, policies changing,” said Theodota Nantsou, the policy coordinator in Athens for the World Wide Fund for Nature. “We see things getting rolled back under the guise of eliminating impediments to investment. But over the long run, all these things will have a heavy cost.”

The fund says standards are widely being ignored or lowered, affecting air, water and land use, from the reduction of mandatory environmental impact reviews to plans for increasing coal use and the likelihood that 95 percent of Greece’s environmental fund — more than $1 billion collected for projects like improving energy efficiency and sustaining nature conservancies — will be absorbed into the general government budget.

In June, the fund issued a report saying it was witnessing an “avalanche of serious environmental losses.” It said some rollbacks were an attempt to fulfill the demands of the trio of creditors, the International Monetary Fund, the European Central Bank and the European Commission, that have been sustaining Greece in recent years. But it said that, to an equal extent, the losses were because of initiatives put forward by various ministries.

No project, however, appears to have elicited more of a public outcry than the resumption of mining operations in the mineral-rich hills here, where legend has it that Alexander the Great also mined for gold. Past mining operations here have been boom-and-bust enterprises, their fortunes swinging with the price of metals, leaving behind ugly piles of sandy gray tailings. Virtually everybody in the area has stories about the runoff from old mining operations, which turned the sea yellow at times.

But perhaps as much as anything, the anger over the mines is a reflection of the fundamental distrust many Greeks feel toward their government: a firm belief that most officials are busy enriching themselves, their friends and their families at the country’s expense. Nick Malkoutzis, a columnist for the conservative daily newspaper Kathimerini, wrote that it was hard to blame villagers for their distrust, when so often companies had been allowed to ignore regulations. “Perhaps in another country, locals would feel more comfortable with the project because the process for awarding public contracts or environmental certificates is transparent and trustworthy,” he wrote, adding that in Greece, that was not the case.

Opponents complain, for instance, that while making the deal with Eldorado, the government failed to make sure that Greece received a percentage of the earnings, a common practice in mining contracts.

And they believe the 50 million euro letter of credit the government got as a guarantee against any problems is not nearly enough.

A spokesman for Eldorado, Kostas Georgantzis, said the Canadian mining company had actually offered more, but that was all the government wanted.

Until recently, environmentalists were beginning to feel optimistic about Greece. Environmental issues dominated the political agenda after George Papandreou was elected prime minister in 2009. He established an Environment, Energy and Climate Change Ministry and appointed a noted environmentalist to head it. He talked with enthusiasm of eco-tourism and renewable energy.

But as Greece’s financial problems snowballed, the head of the ministry was replaced by the former finance minister, George Papaconstantinou, who is now embroiled in a scandal over whether he removed family members from a list of Greeks with Swiss bank accounts. Shortly after his appointment, the permit for Eldorado’s mining plans was issued, though it is still under review in the courts.

Officials of Greece’s environment ministry, responding in writing to questions, acknowledged that they were overhauling regulations with a view to making “modern environmental policies” go hand in hand with much needed investments. But they said the WWF report was “excessively negative” in its conclusions.

They also defended the decision to reintroduce mining in the Chalkidiki area, saying that northern Greece constituted a “wealth reservoir” of metals worth more than 20 billion euros based on current prices. The officials said the permit was issued after an eight-year period of preparations, evaluations and public consultations that ensured that the mining activity would not damage the environment.

In fact, the officials said, the new activity would ensure that the acidic runoff from abandoned mine operations would be averted and modern practices of waste management implemented.

The ministry officials said they were unable to explain the 50 million euro letter of credit because the official in charge of that was on vacation.

Eldorado has big plans for the region. It intends to invest one billion euros in various mining operations there, and its executives expect mining activities to last 15 years or more.

But some opponents question that too, noting that right now the price of gold hovers around $1,700 an ounce, making even the tailings left behind by past mining efforts valuable. Eldorado is already at work reprocessing those tailings, which still contain about 3.4 grams of gold per ton. But the new open pit mine is expected to produce only 0.81 grams per ton. What will happen if the price of gold drops?

Eldorado officials say the villagers need not worry because the open pit mine will also yield copper. But the villagers are not so sure.

The new mining operations have divided the region, in some cases setting brothers against each other. Most often it is those that live close to the sea, where tourists arrive in the summer, who oppose the project. Those that live in the hills where there is little work generally support it.

“These jobs mean that the barber and the doctor will have work too,” said Kostas Karagiannis, who has been working clearing the forest. “It is not just the miners who benefit.”

But opponents worry about dust and ground water pollution. In the last year, opponents of the projects, many of them retirees, have staged more than a half-dozen demonstrations, some of which have been broken up by police shooting tear gas and rubber bullets. Both sides point fingers. Mining officials say the villagers surrounded city hall and kept the mayor imprisoned for eight hours at one point.

But the villagers say that at one particularly large demonstration at the end of October, when 21 villagers were arrested, the police used brutal tactics.

Rania Ververidis, 62, said that she had been ordered out of her car and told to kneel. At that point, she said, a police officer had stomped on her ankle. She was still limping three weeks later, she said.

But she said she intended to protest more. She fears that Greece is in the process “of selling everything.”

“We can’t let that happen without doing anything,” she said.

This article has been revised to reflect the following correction: