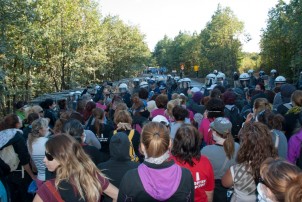 On October 21, more than 2500 people gathered in Halkidiki to protest against gold mining in the region by a subsidiary of the Canadian company El Dorado. Like they do in the last months, as the gold mining creates forest destruction plus water and air pollution on a large scale in an area of high natural value. But that day was different. A peaceful sit-in of a few hundred women, elderly men of the village, teachers and others was suddenly attacked by the police.

Using tear gas and sticks, a manhunt of the retreating crowd – women and men of all ages – followed, creating panic. With limited vision and respiratory problems caused by the chemical smog, people stumbled, were wounded and trampled. People who stayed behind were persecuted and beaten by fully armed men of the Hellenic Police. Part of the violence was captured on video (see links below).

This new episode is part of a much larger movement against gold mining projects in Greece with other citizen groups in Kilkis and Komotini, where similar projects are also creating trouble. There is a pattern of destruction by gold mining and a pattern of increasing violence against unarmed demonstrators. In March we reported how a band of thugs hired by a subsidiary of a Canadian mining company beat up peaceful demonstrators. In May we wrote on the struggle against gold mining in other parts of Greece. And two weeks ago we put the gold mining conflict in Greece in a wider context of a plea for economic degrowth by Greek Professor Giorgos Kallis. The October 21 events show that the conflict is escalating.

The men of the riot police chased people for a full seven kilometers and in the end even between gridlocked cars. They smashed car windows, threw chemicals inside cars, beaten injured and arrested people, threw out of cars and dragged violently passengers. Occasionally the policeman exulted for their achievements and urged their colleagues in similar actions. There are testimonies that the head-officer was trying to restrain them, with no result. This is nothing less than a state licensed manhunt. And the state did not even stop with beating demonstrators to hospital.

The wounded were taken to Polygyros’ hospital with respiratory / heart problems and fractures from policemen attacks. There, they were visited by men of the secret police who demanded the patients identification, which doctors – citing medical confidentiality – denied to give. Fourteen arrests were made on charges of revolt. There has been no accusation of revolt in Greece since the end of the dictatorial regime. The regular court hearing for the case of the arrested demonstrators was set to the 25.10.2012 and was postponed for the 14th of February 2013. But the people used that day to demonstrate in Polygyros, the capital of Halkidiki, to show their support with the arrested friends.