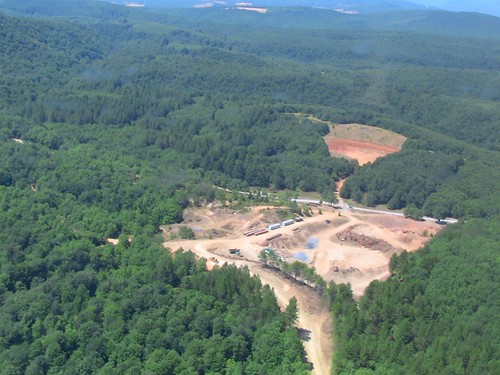 Many thanks to realdemocracygr.wordpress.com for translating our article!

Skouries: the new State of Terror

I am sitting in front of my pc trying to organize my thoughts while at the same time trying to overcome the shock I am under. Its impossible…No matter what kind of language I will use, how much superlative expressions I will put in the paper,  is still difficult  for me to express myself the way I would like to. Hence, I will try to be as simple as possible describing the facts that I experienced and hoping that people will be able to understand.

The yesterday’s demonstration was maybe the biggest regarding the mines and for sure one of the biggest in the Chalkidiki region. More than 2000 people coming from the surrounding area but also from even more far away like Thesaloniki, Kilkis, Thrace gathered in Ieriso, where the car cortege started its course towards Skouries. It was the first time that young people joined our struggle coming from villages apart from Ierisso (where it is considered the ‘’heart’’ of our movement).People from M.Panagia, Ammouliani, Ouranoupoli, Nea Roda, Metaggitsi, Gomati, Ormylia, N.Moudania, Polygiros, Plana, even from the villages that have workers at the gold mines (Stratoniki, Stageira, Paleochori) ignored the propaganda and joined hands.

We left the cars just before the crossroad leading to Skouries (place called ‘’Hontro Dentro’’) and started our march. At about 300 meters distance there were many police vehicles, policemen and about 200-250 miners (in a counter-demo) walking slowly towards us along with the police which was escorting them. I was wondering why the police wasn’t stopping the possible meeting of the two marches. Did they want to promote the fight between us? After a while they retreated realising how much bigger was our demo and we continued our course to Skouries.

The road to Skouries was not blocked by the riot police (as they did several times in the past) but we were informed that about 4 squads were waiting for us in the village.We kept walking the next 8 kms passing through the beautiful forest that they plan to destroy. A small group of 200 remained in Hontro Dentro in order to prevent riot police to coming from behind. Recalling today the brutality of the police, this plan sounds naïve…

When we finally arrived in the village, a wall of policemen was blocking the public road in front of the company’s premises. Behind these policemen they were standing riot policemen and behind them company officials and ‘’secret’’ policemen. In order to keep the atmosphere calm, women stood in front and we all asked to let us pass. They denied completely. Standing in front of their shields we shouted slogans and tried to start a discussion with the policemen that showed no reaction or expression.

‘’We are your wives, your mothers, your sisters and we are protecting our land. We are fighting for our children and our future. Why do you hit us? What are you gonna say to your own kids when they ask you?’’

In our right hand in less than 20 meters we suddenly saw a fire coming out of the woods. The fire department along with several of the women run to put it out. What they realized was that the fire was prepared long before with woods cut and put aside. It was an obvious provocation. The woman that started to shout about it she is now in the hospital of Polygiros with a broken leg by the riot police.

It was getting dark when the police decided to get rid of us. The attack was ordered without any previous assault or provocation from our side. They started throwing a huge number of teargases, screaming ‘’bitches’’ ‘’fagots’’ chasing and beat the ones left behind. I could not run so I entered the woods. I was lying down inside a cloud of teargases with riot policemen walking around me. As soon as managed to escape from them, I joined small group of demonstrators who they were ready to return back with a small truck. There was also a young boy badly beaten in the ribbons.

They were after us for at least 2kms. Cars belonging to demonstrators were transferring as many people as they could. When I reached Hontro Dentro I saw a burning tree standing in the middle of the road as a barricade in order to prevent the riot police coming from the opposite direction. Did I feel sorry for the burning tree? Of course not. I feel sorry for the dozens of thousands of trees that this company is cutting down and is protected by the police. Today* I read in the blog of the company’s supporters the ridiculous title ‘’Shocking! The ‘’ecologist’’ activists cut down and burned a tree in order to turn it in a barricade!’’. None of them though was shocked from the everyday cutting of trees by the company nor by the 4 big trees that they cut and placed in the middle of the road to prevent our last month marching.

While we were waiting in Hontro Dentro everyone to return safe from the mountain, we saw riot police running towards us from the same path that we had used. ‘’There was no way for them to run so fast till here’’ we wondered. Later we found out that these were new squads coming from a different road.

This was the last image that my camera captured. What followed is hard to describe…Like mad dogs they started attacking everyone and throwing tons of teargases. Women were pulled by their hair, people were beaten while they were trying to  enter their own cars and whoever was lying down were trampled violently. The cars could not move fast due to the big number of demonstrators and the traffic jam. Many drivers collided. The riot police was running among the cars, breaking glasses, opening the doors furious and kicking everyone out. One of them saw me wearing a surgery mask and tried to open my door calling me ‘’bitch’’.

I saw with my own eyes a policeman breaking a glass and throwing a teargas INSIDE THE CAR! The interior of the car turned black from the smoke and the driver was thrown out and beaten. They did the same in many cars. One of the drivers lost control of the car and hit a riot-policeman. This person was arrested and today is charged with ‘’ grievous bodily harm’’!

Without any doubts I claim that the police order was ‘’SMASH THEM SO THEY WILL NOT RETURN TO THE MOUNTAIN’’. They didn’t want just to disperse the mobilization (this is anyway easy for them with the plastic bullets and the teargases while we were not prepared).Their attack (as we were departing from the place and we were no harm to them) is an organized crime (there is no other way for me to describe it) and I am sure that if they had guns they would have used them.

Around 15 from us were arrested. The chief police officer Mr Papoutsis visited the hospital in Polygiros (where many of the injured were treated) and requested their names. The doctors (to their credit) refused. Junta…

This word comes in my mind not without a reason. Today* the 15 arrested demonstrators will face the court (under flagrant) accused of ‘’revolt’’ against the State. This is article 170 of our Penal Code. Noone has been accused with this since the dictatorship.

Then we are all guilty. All the 2500 people that gathered in Skouries and the majority of the citizens that is against the company’s plans. Everyone in the country who is aware of the crime that is about to be committed in our mountain forest is supporting us and they would have been here with us if they could. EVERYONE