Source: www.ejolt.org. The facts are not quite right, but more or less that’s the picture. 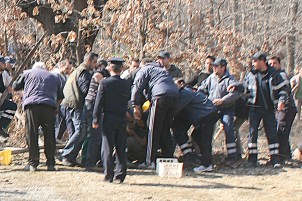 A battle centered on gold mines in the north of Greece is turning violent. Because of the economical crisis, corporations are ‘buying’ at almost no cost the previously public forests and water in order to collect gold. “Greek Gold S.A.”, a subsidiary of Canadian company “European Goldfields” is paying 1600 euros per citizen to people without a real job to work for them. First job: chase the protestors who want to protect their pristine forest and water resources. Just a few days ago, hundreds of employees from European Goldfield – aided by about 30 policemen – attacked their fellow neighbors citizens who tried to protect the pristine forest of Chalkidiki and water peacefully. Fifteen people were badly injured and eight had to go to hospital. One of the defenders is right now in the hospital struggling for his life. They totally destroyed an outpost that was build to protect the forest. This comes only days after Bernardo Vasquez, an activist against the construction of a mine in San José del Progreso in Oaxaca, was murdered by what appears to be a group of thugs hired by the Canadian company Fortuna Silver Mines.

The fault lines of this open conflict often run straight through families, with a son working for the mine and a mother protesting against it. The EU and IMF are pushing the Greek government to sell even the most valuable forests of Greece to private companies at dumping prices. Back in February 2011, a Greek MEP already asked a question on gold mining in Halkidiki, more specifically on the  ‘public consultation’ and the destruction of the environment. But Europe only responds with asking Greece to speed up privatization of the common good. In Greece, the crisis is not used as an opportunity to build a new society based on justice and sustainability. It is used by corporations to speed up their grabbing of resources, with ever less concerns about the citizens and the long-term future of Greece. It is a situation of quickly taking away what is left with profits flowing out of Greece but long term costs being left behind for the Greec people. When on Sunday a big rally went to the site of the conflict, the police dispersed them with tear gas and arrested several demonstrators, who were only released when masses of people kept surrounding the local police station. Local societies have now formed the “Coordinating Committee to Combat Mining Activities” and are prepared for a long period of mobilization.

A Greek cooperation is organizing the defense against this privatization of the commons:  http://www.136.gr/ In English: http://translate.google.com/translate?sl=el&tl=en&js=n&prev=_t&hl=en&ie=UTF-8&layout=2&eotf=1&u=http%3A%2F%2Fwww.136.gr%2F&act=url